December Lunch: The Business of Basketball 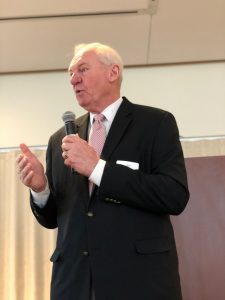 At Venture Connectors’ December lunch, Dan Issel, a retired professional basketball player and president of the Louisville Basketball Investment and Support Group LLC, shared highlights from his career and give an update on the ‚ÄúNBA 2 Louisville‚Äù initiative. Check out this great article about his talk on Insider Louisville here.

A star at the University of Kentucky in the 1960s under Hall of Fame coach Adolph Rupp, Issel set 23 school records, including most points and rebounds, and led the Wildcats to three Southeastern Conference titles. He went on to play for six seasons for the American Basketball Association‚Äôs Kentucky Colonels, where he was part of its ABA championship team in 1975. He then moved on to the Denver Nuggets, where he played for nine NBA seasons.

Known as one of the hardest working players in basketball history, Issel played in more than 1,200 games in his professional career. He was a six-time ABA All-Star and one-time NBA All-Star. He retired in 1985 as one of the greatest scorers in basketball history, then returned to the Nuggets as their head coach in the early 1990s. He was elected to the Naismith Memorial Basketball Hall of Fame in 1993.

Issel was named president of Louisville Basketball Investment and Support Group in February to lead the organization‚Äôs efforts to bring an NBA franchise to Louisville.