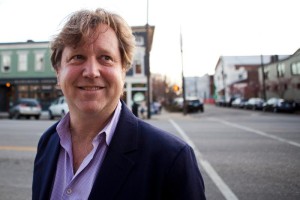 On Wednesday, Jan. 6, Venture Connectors hosted developer Gill Holland, who will give an update on the progress of Louisville‚Äôs Portland Investment Initiative. He discussed what is working and what isn‚Äôt, as well as what the community can expect in the coming years from Portland, a low-income neighborhood in Louisville‚Äôs West End.

Holland also shared insights into opportunities for the entrepreneurial community to get involved in revitalization efforts. Holland began to implement his vision for Portland in 2013, which includes restoring homes, converting empty warehouses into mixed-use developments and reviving the area‚Äôs business district.

Holland is president of the NuLu Business Association. He coined the term ‚ÄúNuLu‚Äù and has been instrumental in turning the East Market Street corridor into a thriving arts, restaurant, retail and sustainable district. He opened the Green Building there, Kentucky‚Äôs greenest commercial structure.

Holland has more than 100 film producing credits and was a Spirit Award nominee for film producer of the year. The Spirit Awards are the Oscars for independent films. Holland is a former lawyer and runs sonaBLAST! Records, now celebrating its 70th album release, and is involved on many cultural boards.¬†He was named 2009 Person of the Year by Louisville Magazine.