Lullafeed is the 2018 Venture Sharks winner! 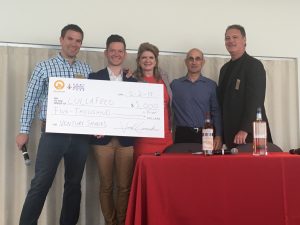 Venture Connectors has named Innovative Therapeutix Inc. the winner of its 9th annual Venture Sharks‚Ñ¢ business competition. Innovative Therapeutix is the developer of LullaFeed, a feeding device for infants that uses music reinforcement. The final round of competition was held May 2, where five entrepreneurs seeking funding for their business plans faced off with a panel of savvy investor sharks fishing for the next great deal. Congratulations to Michael Detmer and his team!

The others finalists were: Desicorp, developer of a dried blood transfusion unit; MyNurse, a mobile platform that enables patients and families to easily find a caregiver in real time by geolocation; Parasite ID LLC, developer of Lice Detector, a test strip for lice; and Agent Ally, winner of the 2018 Startup Weekend, which is working on a plan to streamline Medicare software.

For the second year, the audience was invited to choose their favorite finalist via text voting at the finals. Innovative Therapeutix also took home audience favorite award and received $695 raised (minus processing fees) via an Audience Participation Crowd Funding Campaign.

Venture Connectors received more than 40 applications from entrepreneurs across the region Presenters were allowed a few minutes to describe their idea to the judges, who then fired off questions to the presenters in the style of the popular television show, ‚ÄúShark Tank.‚Äù The lucky survivor received more than $20,000 in cash and prizes to help them take their idea to market. Innovative Therapeutix was selected based on the viability of its idea, the ability of the final award to positively impact the business and the quality of their presentation.

This year‚Äôs Venture Sharks title sponsor is the Vogt Invention & Innovation Fund. In kind sponsors are Fort Phelps PLLC, KiZAN, Splash Analytics, Austin Lopesilvero: Web Designer & Entrepreneur, Story Louisville and Venture First. Thanks to many generous sponsors over the years, Venture Sharks has awarded more than $100,000 in prizes since it launched in 2010.