March luncheon: The business of bourbon 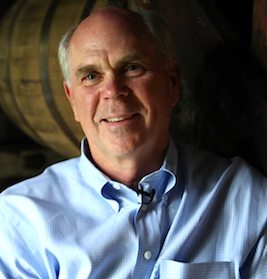 Our March lunch featured a lively Q&A with Julian P. Van Winkle III, president of the Old Rip Van Winkle Distillery. His company is the¬†maker of some of the world‚Äôs finest aged bourbons, including the legendary Pappy Van Winkle Family Reserve brand. Van Winkle shared the history of the brand and what has contributed to a renaissance in its success, as well as his thoughts on state of the bourbon industry in Kentucky.

Julian III‚Äôs grandfather, Julian ‚ÄúPappy‚Äù Van Winkle, got into the bourbon business in 1893 at the age of 18, buoyed by the philosophy, ‚Äúproduct over profit.‚Äù Pappy‚Äôs son, Julian Jr., operated the family‚Äôs Stitzel-Weller Distillery from 1964 until it was sold in 1972. He established J.P. Van Winkle and Son to begin marketing other bourbons, but created the Old Rip Van Winkle label as a side venture.

Julian III took over the business in 1981 after his father died, at a time when the premium bourbon industry was in a lull. He purchased the Old Hoffman Distillery in Lawrenceburg, Ky., for barrel storage and bottling. A major turning point came in 1996, when a sales rep submitted bottles of Van Winkle 20-year to the prestigious Beverage Testing Institute. It earned a rating of 99, which was unprecedented for whiskey, scotch or bourbon. Accolades and increased demand followed, including a James Beard Foundation award in 2011.